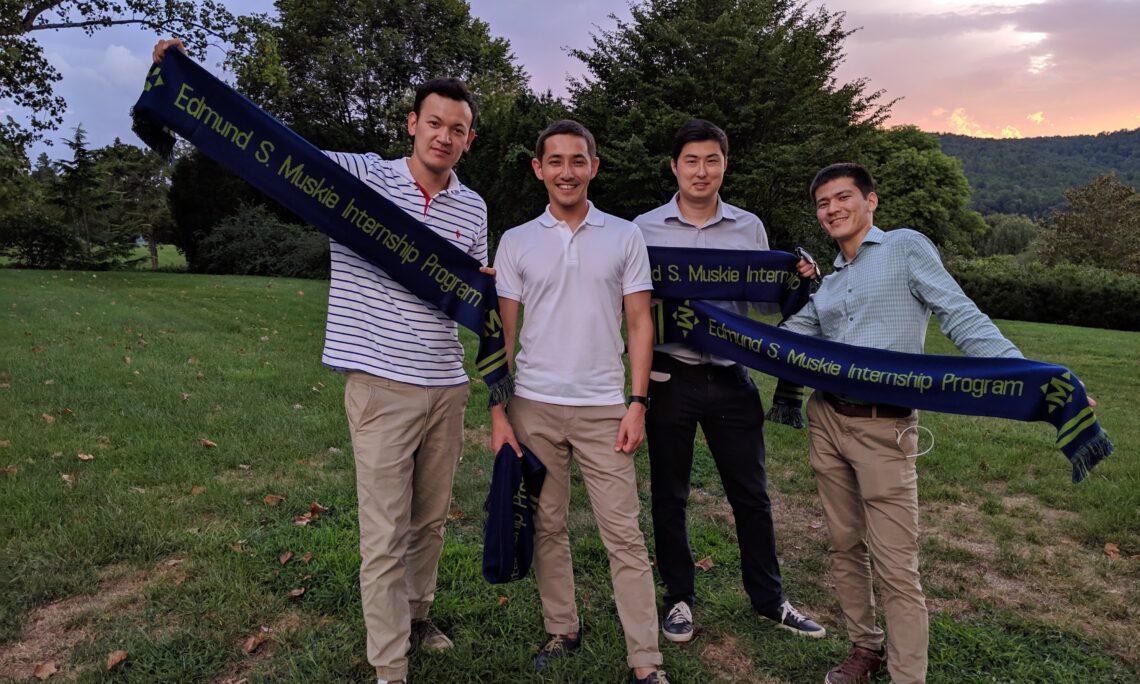 – In 2019, you became a member of Fulbright Foreign Student program. Could you tell us what preceded it?

– The first thoughts about getting a foreign education arose when I was a student at Kazakhstan university. However, at that time, they had not yet acquired a clearly defined character. Around this time, I began to improve my English and started visiting the American Corner in Kostanay, where I met Peace Corps volunteers and many other enthusiastic participants. There I met Anna Blum, who ran the corner, and learned about the Fulbright program for the first time. At the same time, I decided to apply for participation.

– Participation in the program is an invaluable experience that comes once in a lifetime and changes it dramatically. A significant component of the program is not so much the opportunity to learn, but the chance to touch a vast majority of cultures. As far as I know, approximately four thousand people from all over the world from different spheres of life become participants of the program every year. One way or another, when faced with them, there is personal enrichment. For example, about 6-7 years ago I read Khaled Hosseini’s book “Running after the Wind”, which deals with the difficult fate of two boys – one Pashtun (a representative of the national majority) and a Hazara (a national minority, mainly of Turkic origin). Thanks to Fulbright program, I happened to meet another participant from Afghanistan, who belongs to Hazara people. It is unlikely that I would have been able to hear stories оf vital importance from an eyewitness to many events, if I had not been a participant in the program. During those two years, we had many cultural events, as the US State Department creates conditions for people from different countries to meet not only in the conditions of educational institutions, but also outside their walls. So, for example, I managed to visit Washington, DC twice. Other Fulbrightsmen came across different areas. In the first year, one of them could go to Florida, and in the second-somewhere in the west of America. As befits a large country, the differences in the mentality of two places can be noticeable, and in America, with its cultural diversity, these differences take on kind of contrast.

– What conclusions did you draw for yourself after training on arrival in Kazakhstan?

– Before leaving for the United States and already on the spot, we conducted training sessions for the participants to better acclimatize to the new conditions. We were told about such a concept as culture shock and how best to survive it. At one of the trainings, they also talked about the so-called “reverse culture shock”, when a person returns home after a long journey. Then many things that seemed familiar are seen differently. On the other hand, many people from the former post-Soviet states think that if you leave and start living in the United States, you can consider that life was a success. Probably, this was largely due to the media atmosphere created. I myself still remember those Sunday editions of the TV show “America with Mikhail Taruta”, which aired every Sunday morning in the early-mid-90s. They created a sense of a window into another world for me, and probably for other people as well. However, the reality is somewhat different than it is seen from TV screens. Like any society, the American one has a number of problems that are trying to be solved through democratic processes, civil initiatives and an active position of citizens.

– If you have a project, can you share positive statistics?

– At the moment, I am involved in the project of  Perekrestok Non-Profit Organization in Kostanay, which is still under development. The project was announced by the US Embassy in Kazakhstan in mid-March. It includes three areas: anti-human-trafficking, solving air quality problems and promoting the use of renewable energy sources. As you know, the air quality in such cities of Kazakhstan as Nur-Sultan, Almaty and Ust-Kamenogorsk has deteriorated significantly in the last couple of years. At the moment, there are information platforms developed by Kazhydromet, the scientific community and activists, which notify about the level of pollutants in many cities of Kazakhstan. However, Kostanay, in my opinion, is data deficient in this matter. So, on the portal airkaz.org data from 20 stations located in Almaty is displayed. In Nur-Sultan, there are only three stations that transmit information in real time. Unfortunately, such cities as Kostanay, Rudny, Petropavlovsk and many others are not represented on this resource. On another resource iqair.com which is largely based on the data provided by Kazhydromet, the coverage picture is more complete. However, even there, in many cities, data is transmitted from one or two sensors. All of these sensors transmit outdoor air readings. If we talk about the quality of indoor air, where people from industrialized countries spend almost 90% of their time, according to the U.S. Environmental Protection Agency, the concentration of harmful substances inside the room is 2-5 times higher than that outside. Our project aims to study the dynamics for Kazakhstan conditions.

– What unusual things have you learned about the United States?

– The fact that some Americans wear flip-flops and shorts in winter, and during a real winter, although not as severe as we have in the north. And they drink everything with ice, again, even in winter. If you order something to drink in an American restaurant or cafe, then by default they will bring a glass with a lot of ice in it. For this reason, it is better to say in advance that you need no ice if your throat or nose is sensitive to low temperatures.

– What surprised you the most during the training program?

– Every opinion is important and everyone can be a valuable participant in the discussion, regardless of how stupid the question may seem, for example.

– It took me several years to finally decide to apply. I used to think that I would not be suitable for my skills, abilities, and so on. This problem was not unique to me. I met people, both in Kazakhstan and from other countries, who said: “I’m not too good to apply yet, maybe next year, when I’ll do this and that.” I would recommend applying the moment you learn about an open opportunity, and not be afraid of getting rejected the first time.