Home Home | News & Events | “I get inspiration from my students”: Ben Taylor on teaching Kazakhs English 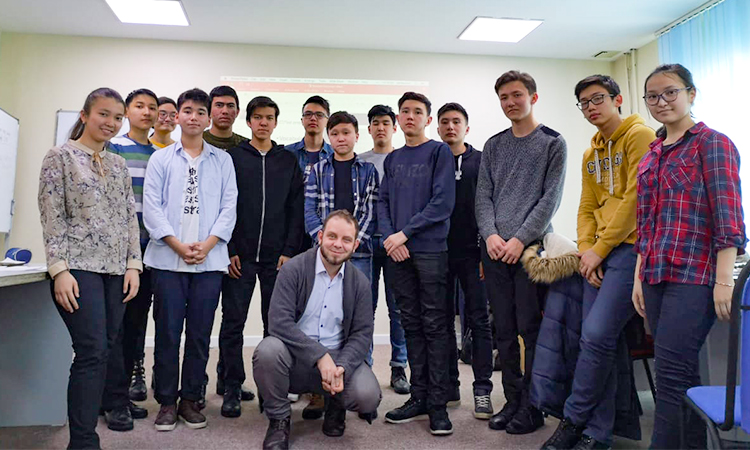 “I get inspiration from my students”: Ben Taylor on teaching Kazakhs English

– Ben, could you tell us how it appeared that you ended up in Kazakhstan?

– After graduation, I was preparing to build a career as an English teacher outside the United States. When I was 22, I went to work in South Korea. And later, at the age of 27, I became a Peace Corps volunteer on the Pacific island of Pohnpei in the Federated States of Micronesia. At that time, I first heard about English Language Fellow program, in which English teachers are sent abroad for ten months. This idea seemed very interesting to me, so I applied in 2015. Even then, I decided that I would go to any country where I would be sent, but there was still a preference. I dreamed of working in Central Asia, because I knew very little about these countries. When I was sent to Nur-Sultan, I only knew that the capital is one of the coldest.

– What was your job in Nur-Sultan?

– Upon arrival, I worked at L. N. Gumilyov Eurasian National University. The program included three areas. The first was working with students who will become teachers. The second – with teachers who work at the university. I told them how to teach English in a way that was clear to the students. That is, I built a methodology for teaching the language in Kazakhstan. And the third area – I held discussion clubs in American Corners for the development of spoken English. We also have an English Access program, which provides two-year language training for children from low-income families. It operates on the territory of the whole of Kazakhstan, and I worked with children from Kostanay. I also would like to add that in addition to the educational segment, there was also a cultural one. During national holidays, I created videos in coordination with the US Embassy. In the second year of the program, I was transferred to the Karaganda Polytechnic Institute.

– It is known that one of your videos about the celebration of Nauryz has become very popular on the Web. How did this moment affect your career?

– Yes, that’s right. The video, which we made together with the US Embassy in Kazakhstan, was viewed by more than 20 thousand network users. And after that, Wren Elhai, the pPress aAttache of the Embassy, invited me to become the host of a program on Karaganda TV channel “New TV”. The idea was to conduct lessons during the broadcasts for those people who, for various reasons, could not participate in English language courses. Also, while in Karaganda, I decided to teach students how to write essays for admission to US universities. I conducted these trainings in courses even after my exchange program ended. As a result, I was able to work with students from Petropavlovsk, Aktobe, Karaganda, Turkestan, Taraz, Almaty, Kokshetau, Ust-Kamenogorsk and Central Asian countries.

– What are you doing now?

– Now I work with students of Central Asia in the framework of English Access program via Zoom. I also help teachers. In the format of training courses that I have developed, I tell you how to use various online platforms for educational purposes. All these services are free of charge. This is very important to me. I also work with an NGO Bilim Barine in Aktau, where they instruct trainers from Central Asia, who will be able to continue my activities when I leave Kazakhstan.

– What do you plan to do in the near future?

– My short-term plans are to implement three projects: English for journalists, English Access summer camp, and training for teachers in Central Asia. Another major project is the creation of an online course “How to write essays for admission to US universities”. I decided to create it thanks to the motivation that came from my students. I would like to emphasize that all courses will be free of charge, so everyone will have access – schoolchildren, teachers, students, and professionals.

– You have been living in Kazakhstan for five years. Could you tell us, how did this experience affect you?

“My life has changed completely. Even my vision of teaching has changed. At the beginning of our conversation, I said that before coming to Kazakhstan, I worked on Pohnpei Island. So, there was no technology, even access to Wi-Fi was limited. When I came to Kazakhstan, I saw that everything is different here. Here you can use a variety of features to adapt to the standards. And by the way, I want to say that during the pandemic, I realized that working online, you can reach much more.

– First, the people. When I worked at ENU, I used to take the bus. Often they were crowded, but when an elderly person or a pregnant woman entered, people stood up for them. I really appreciate this attitude to people. I also like the kitchen. When I lived in Karaganda, I always went to small canteens, where they cook delicious food. I also liked the national music-dombra, kobyz and I listen to Moldanazar with pleasure. I would also like to add that I grew up in America, where there is winter, but there are no such extreme frosts, but when I came to Nur-Sultan, I fell in love with the local winter. I also really like to ride on the night trains, where you can drink tea with milk and chat all night with fellow travelers.

– It is known that about 6-15 Americans a year come to Kazakhstan as part of the English Language Fellow program. What advice would you give them?

– In Kazakhstan, time works differently, so it is important not to make a too tight schedule. A little time should be left for unforeseen things and try to make your schedule more flexible. For those who are going to live in northern Kazakhstan-do not be afraid of winter. When I was going to go here, I bought a lot of warm clothes. But upon arrival, I realized that here you can buy all the same things. Russian language is very developed here, you can be understood everywhere, but my advice is to learn at least a few words in Kazakh language. For a greeting or gratitude pronounced in the state language, they will not only smile back, but will also appreciate and respect you.