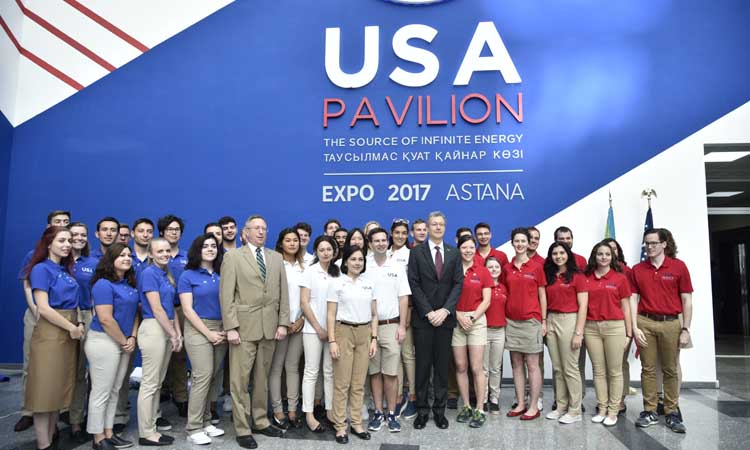 As my plane to Astana took the final turn before descent—I saw it.  The Nur Alem, a huge, glowing sphere lit up the Kazakhstani steppes, dancing with color and a message for all visitors written in huge letters “ASTANA EXPO 2017.” I’d seen many sketches and renderings of the Expo grounds over the past six months, but from the skies the Expo and the spirit of future energy loomed large and full of life.

I had been waiting for this moment for months. The Astana Expo 2017 is the biggest international exposition in Eurasian history, and I was so excited to be a part of something so special and represent the United States.  The Expo as a whole features well over 100 pavilions each presenting a different take on the theme of ‘Future Energy.’

The USA Pavilion asks the question, “What is the Source of Infinite Energy?,”  and tells the stories of American Innovators using pictures, videos, music, dance and most importantly, our Student Ambassadors. Forty young men and women from all over the United States from different backgrounds staff the Pavilion every day to meet visitors and build the bonds between the United States and the world—one person at a time.  Between the Student Ambassadors, they speak 17 different languages in addition to Russian and Kazakh, and have too many accomplishments to list here.  Their passion and enthusiasm embodies the answer, that WE are the source of infinite energy, that our ideas, hopes, and dreams make the progress needed to power the future.

The USA Pavilion is unique in that our pavilion is a public-private partnership—for the past year, the U.S. Department of State worked tirelessly with companies, business associations, international organizations and the Government of Kazakhstan to make sure that the United States was represented here on the world’s stage in Astana.

Over the last 25 years, the United States and Kazakhstan have built strong economic, security, and educational partnerships that benefit the people of our two countries.  During this period, Kazakhstan has emerged onto the global stage.  It is the first Central Asian state to hold a seat on the U.N. Security Council, will soon open a Low Enriched Uranium Bank under the auspices of the IAEA, and has played host to important international events including talks on the Syrian conflict and a regional summit on countering violent extremism.  Expo 2017 adds to that list of accomplishments.  In a recent video message, Secretary of State Rex Tillerson thanked the people and government of Kazakhstan for their partnership over the past 25 years.

On Opening Day, I stood in the midst of a community.  Members of the U.S. and Kazakhstani governments, CEOs and staffers, colleagues and strangers—together we watched U.S. Ambassador and Commissioner of the Pavilion, George Krol administer the Student Ambassador Oath to “cheerfully swear” to enhance the visit of every guest with “patience, patriotism, understanding and enthusiasm… So help [them] Uncle Sam,” and we laughed and cheered.  The USA Pavilion, impressive in its size and design, is living proof of what can be accomplished when you harness the energy of people.  Walking around the impressive Expo grounds, it was clear that the Republic of Kazakhstan cares deeply about hosting 112 nations and taking leadership on a global level.

By the end of the day, over 10,000 visitors came through the Expo gates, and 4,000 people visited the USA Pavilion.  All of us on the ground in Astana and at home in the United States have worked to make U.S. participation a reality. I hope to see you walking into the USA Pavilion here in Astana sometime over the next three months, but you can follow along from anywhere in the world—check out Embassy Astana’s Facebook Page and our Instagram @USinKZ, and #USAEXPO2017!

About the Author: Alice Cosgrove serves as the Special Liaison for Programming and Communications in the Bureau of South and Central Asian Affairs at the U.S. Department of State.