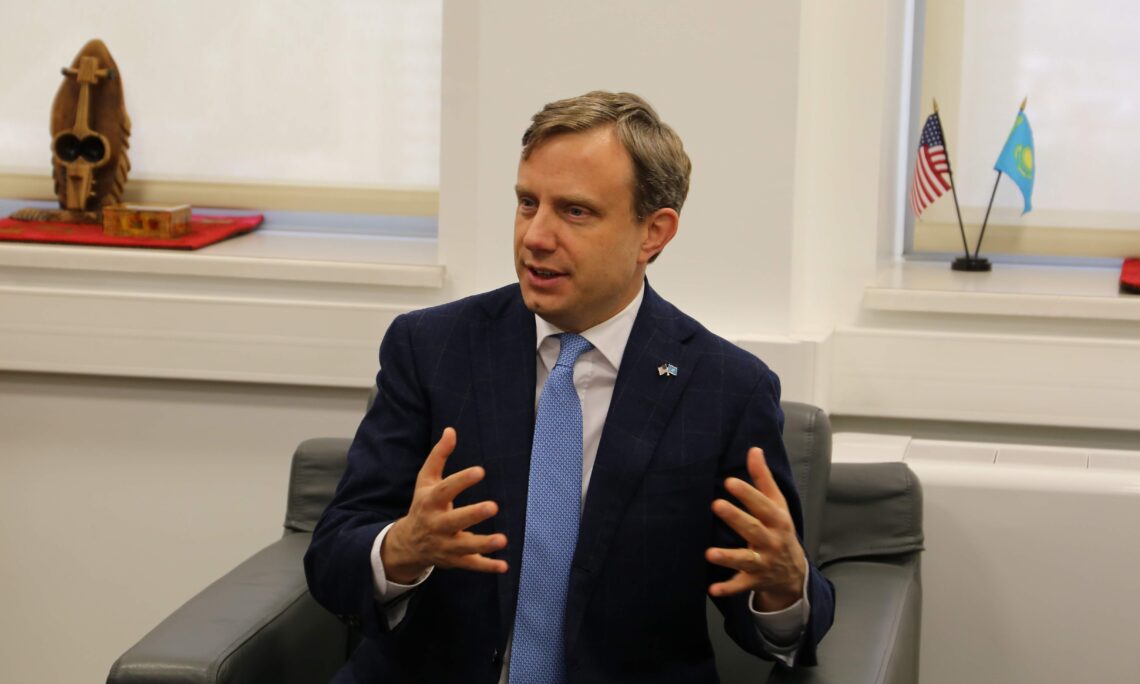 This article first appeared in the Shymkent-based Ontustik Rabat print edition in Kazakh on September 17, 2020, and was republished on Otyrar and Baq.kz news sites.

The United States is committed to ending modern slavery worldwide.  We remain steadfast in declaring that there is no excuse for human trafficking and that governments must take bold action in order to bring necessary reforms.

The U.S. Department of State annually publishes the Trafficking in Persons (TIP) Report, our government’s principal diplomatic tool to engage foreign governments on human trafficking.  Countries are placed into one of four lists (or tiers) based on their respective governments’ level of effort and effectiveness in combatting human trafficking.

The Government of Kazakhstan has begun enacting reforms and takes the situation seriously, as President Tokayev noted in his Address to the Nation on September 1, 2020.  However, I believe it is important to acknowledge Kazakhstan remains a destination, transit, and origin country for trafficking, and much work remains to be done.

In 2019, Kazakhstan’s ranking in the TIP Report fell to the Tier 2-Watch List.  Two consecutive years on the Tier 2 Watch List triggers a mandatory drop to Tier 3.  In addition to the moral reasons for protecting the vulnerable, a Tier 3 ranking triggers restrictions on types of engagement from the United States, including forms of financial assistance.

I want to stress – no tier ranking is permanent, and I am pleased the Government of Kazakhstan is making efforts to combat trafficking in persons within its sovereign borders; however, further action is needed and the United States stands ready to support these ongoing efforts.

Kazakhstan made efforts over the years to recognize and counter what is essentially modern day slavery – such as by the government funding trafficking shelters – but there are some important gaps that have emerged as labor migration evolves in the Central Asia region.

Foreign labor migration to Kazakhstan increased, creating opportunities for criminals to exploit people seeking work.  COVID-19, the associated visa restrictions, and border closures have only exacerbated the vulnerabilities of foreign labor migrants.  The recommendations in the report address the need to identify and help foreign victims and victims of labor exploitation and to prosecute more trafficking crimes.

The United States stands ready to help Kazakhstan meet these challenges.  For example, through our International Narcotics and Law Enforcement program, the United States launched a new project with the International Organization for Migration to support Kazakhstan’s own work on countering trafficking.  The USG’s Safe Migration in Central Asia project strengthens the mutual accountability and effectiveness of governments, non-governmental organizations, and the private sector to prevent trafficking-in-persons, protect survivors, and promote safe migration.  In response to the 2019 report recommendations, Kazakhstan made progress in a number of areas, including providing specialized training to labor inspectors to improve identification of labor and foreign victims; developing guidelines for diplomatic personnel on victim identification; and changes to the Criminal Code.

2. Since January 1, 2020 some amendments of Criminal Code have entered into force. Some amendments were made as a result of President Tokayev’s September 2019 address when he stated that “Punishment for such crimes as gender based violence, pedophilia, drugs traffic, trafficking in persons, domestic violence against women and other heavy crimes, especially affecting children, should be toughened.”  In fact, punishment for Articles 128 and 135 have been toughened. Which other amendments would you suggest to eliminate trafficking in persons?

Yes, in response to the 2019 report recommendations, Kazakhstan made progress in a number of areas.  Having the right legislation in place is crucial to eliminating trafficking – the right legal tools need to be in place to stop it.  The amendments that entered into force on January 1 were an important step – rescinding the ability for traffickers to “reconcile” to avoid criminal trial (Article 68); and increasing the punishment for trafficking (Article 128 and 135) and rape/sexual assault (Articles 120 and 121).

There are additional changes that could be beneficial to helping Kazakhstan combat human trafficking. The recommendations in the report address the need to identify and help foreign victims and victims of labor exploitation and to prosecute more trafficking crimes.  I would highlight three particularly important recommendations: amendments to the Special Social Services Law to expand shelter assistance to foreign victims; introduction of a reflection period to allow foreign victims to take an informed decision as whether or not to report a crime; and an amendment to the  definition of human trafficking under articles 128 and 135, to include force, fraud or coercion as an essential element of the crime instead of an aggravating circumstance.

3. Trafficking in persons is a crime that is not only internal, it is a crime that has an international, transnational nature. That is why it should be addressed not only at a scale of national borders but also from a regional point of view. According to the TIP report, the legislation in Central Asian countries cannot protect the victims of trafficking in persons. Kazakhstan, Kyrgyzstan and Uzbekistan are in Tier 2 Watchlist, while Turkmenistan is still in Tier 3. Tajikistan managed to move up to Tier 2. Before becoming Consul General in Almaty, you served as Special Assistant and Senior Advisor in the Bureau of South and Central Asian Affairs. In your opinion, which common gaps in countering TIP are specific for Central Asian countries?

While significant efforts have been made in Central Asia, challenges continue in implementing legislation, and in allocating adequate financial and human resources to sustain and effectively combat trafficking in persons (TIP).  With USG support, regional networks are working to strengthen coordination on TIP cases and to exchange information.  While there are a significant number of civil society organizations providing protection and prevention services, overall capacity is underfunded and can be strengthened further.  There continues to be a need for safe migration information and ways to verify employment opportunities as most migrants leave their country with the help of family and diaspora networks who are seen as more trustworthy than formal institutions.

Because Kazakhstan is a country of destination, the main challenge for Kazakhstan is to ensure that legal employment opportunities are in place for labor migrants to work in a safe environment and avoid risks of being exploited. At the same time, all countries in the region, whether source, transit, or destination have common problems in fighting human trafficking, such as weak regulatory framework and implementing mechanisms.

4. Central Asian citizens go to Russia for jobs. How does this impact countering and eliminating TIP and protecting TIP victims in the Central Asian region?

Russia remains the largest destination country for labor migration from Central Asian countries. This creates challenges for Kazakhstan. As a transit country, Kazakhstan shares responsibility for safe migration with both country of source (for example, Uzbekistan) and country of destination (Russia).  Russia’s implementation of a re-entry ban for some Central Asians harmed the migrant labor environment in Central Asia. Some migrants returned home, but many, if not all, sought employment in Kazakhstan. The increased flow of labor migrants to Kazakhstan created risks for human trafficking, and a need for increased victim protection.  While impressive efforts have been undertaken by Kazakhstan to protect Kazakhstani victims, assistance to foreign victims remains a challenge.

5. What kind of negative impact will the fact that Kazakhstan dropped to Tier 2 Watchlist have on the country’s international reputation, investment climate, and tourism development?

Again, I think it is important that we speak frankly about the potential for severe consequences if Kazakhstan were not to improve its ranking for the third year in a row.  As mentioned, any country that has been ranked Tier 2 Watch List for two consecutive years  will instead drop to Tier 3.  Tier 3 ranking can trigger severe restrictions on foreign assistance.

But I want to again stress, no tier ranking is permanent.  I am pleased the Government of Kazakhstan is making efforts to combat trafficking in persons within its sovereign borders; however, further action is needed and the United States stands ready to support these ongoing efforts.

6. Shymkent and Turkistan oblast share a common border with Uzbekistan. Are there common activities that aim to counter trafficking in persons, and to establish economic and political security in the region?

The Shymkent Platform is an annual regional event, hosted in Shymkent, that brings together law enforcement officials from Kazakhstan, the Kyrgyz Republic, Tajikistan, and Uzbekistan, together with experts from around the world, to coordinate anti-trafficking activities in the region.  In addition, both the U.S. government and the Government of Kazakhstan support the NGO Sana Sezim, based in Shymkent, which coordinates with shelters across Kazakhstan to support victims of trafficking.  Sana Sezim also works on trafficking prevention and anti-trafficking education along the Uzbekistan-Kazakhstan border.  Speaking about the border, one of the most important things Kazakhstan could do right now to enhance its counter trafficking efforts would be to post signs with its hotline number and information about trafficking at all border crossings, airports, bus stations, and train stations, and provide border officials with ‘Indicator Cards’ to help them identify victims.

7. Due to the coronavirus pandemic, many jobs have been suppressed, unemployment rates are increasing in the world. The UN forecasts that it will lead to a rise of human labor exploitation, forced labor, and migration. One of the examples are thousands of Uzbek and Tajik citizens stuck at Kazakh-Uzbek border. Which actions should countries take in future to prevent this from happening and to stop the increase of TIP?

Yes, the urgency to effectively address human trafficking has only grown as a result of the COVID-19 pandemic.

In April of this year, Kazakhstan ratified an agreement with Uzbekistan to protect the rights of migrant workers. The document strengthens regulation of migration flows and efforts to prevent illegal labor, and guarantees free medical care when migrants are physically injured while performing work duties, contract occupational diseases, or are subject to any health problems as a result of their work activities.  The agreement also stipulates that employees will be paid compensation for physical damage caused.  In addition, the agreement provides for the recognition of documents confirming the educational qualifications of migrant workers engaged in pedagogical, medical, and pharmaceutical activities.  This agreement  is very general and is hopefully just the beginning of the process.   Ensuring that this agreement is implemented fully, would help reduce forced labor migration.

Immediate action to increase victims’ access to help could greatly reduce the risk of exploitation.  As I mentioned, posting signs with Kazakhstan’s hotline number and information about trafficking at all border crossings, airports, bus stations, and train stations, and providing border officials with ‘Indicator Cards’ to help them identify victims could help the increasing number of people at risk of exploitation now while this crisis is still ongoing.

I would again highlight three particularly important actions Kazakhstan can take:  amend the Special Social Services Law to expand shelter assistance to foreign victims; introduce a reflection period to allow foreign victims to take an informed decision as whether or not to report a crime; and an amend the  definition of human trafficking under articles 128 and 135, to include force, fraud or coercion as an essential element of the crime instead of an aggravating circumstance.