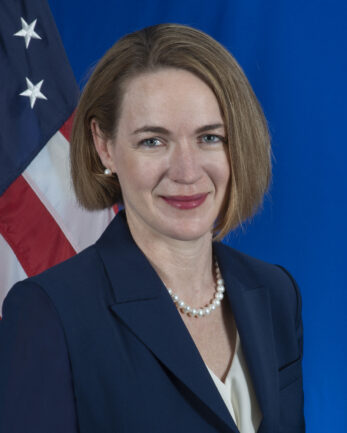 A career Foreign Service Officer with the U.S. Department of State since 2004, Caroline Savage assumed the position of U.S. Consul General in Almaty, Kazakhstan, in August 2021.

Previously, during the run-up to the 2020 U.S. presidential elections, Ms. Savage served in the Bureau of Global Public Affairs as Director of the Foreign Press Centers, whose mission is to deepen global understanding of U.S. policy and American values through engagement with foreign media, including 2,200 U.S.-based journalists.

From 2019 to 2021, Ms. Savage was a non-resident fellow at Georgetown University’s Institute for the Study of Diplomacy, where her focus was diverse diplomatic leadership, a project she began during her tenure as the Virginia and Dean Rusk Fellow at Georgetown from 2018 to 2019.  During her Rusk Fellowship, Ms. Savage taught courses on Diplomatic and Military Statecraft and U.S.-Russia Relations to undergraduate and graduate students.

Ms. Savage was Director for Russia and Central Asia on the National Security Council from 2010 to 2011, leading interagency development of national security and foreign policy with Russia and Central Asia.  She also served as Political-Military and External Affairs Officer in the Office of Russian Affairs from 2009-2010 where she formulated U.S. policy and diplomatic strategy for the U.S. military and Russia’s relations abroad in bilateral and multilateral fora.

Ms. Savage’s overseas assignments include service as Public Affairs Officer at U.S. Embassy Azerbaijan (2016-2018), during which time her team shaped the Mission’s communications strategy, broadened English language access, supported grassroots organizations, and strengthened journalistic professionalism in Azerbaijan and the region.  As Public Affairs Officer at U.S. Embassy in Mozambique (2012-2015), Ms. Savage’s team promoted peace and stability, innovation and tech sectors, and nation-wide access to healthcare information and public health interventions. She also served at U.S. Embassy in Belarus (2007-2009) as Public Affairs and Consular officer, during and after the Belarusian government’s expulsion of most U.S. Embassy American staff, and at the U.S. Embassy in Luxembourg as Political and Consular Officer (2005-2006) during the country’s European Union Presidency.

Prior to joining the State Department, Ms. Savage managed energy and utility regulatory programs for a USAID contract between counterparts in the United States, Eastern Europe, and the former Soviet Union. She also worked at the Center for Strategic and International Studies, the Woodrow Wilson Center for International Affairs, CNN’s Moscow Bureau, and as an English teacher at St. Petersburg State University and the Moscow Energy Institute.

A native of Wauwatosa, Wisconsin, Ms. Savage graduated from Georgetown University’s Edmund A. Walsh School of Foreign Service and earned Master’s degrees in Russian, East European and Central Asian Studies and Political Science from the University of Wisconsin-Madison. She is the recipient of multiple Department of State Superior and Meritorious Awards and has studied Kazakh, Russian, Azerbaijani, French, and Portuguese. Ms. Savage serves in Kazakhstan alongside her State Department officer husband and their two children.