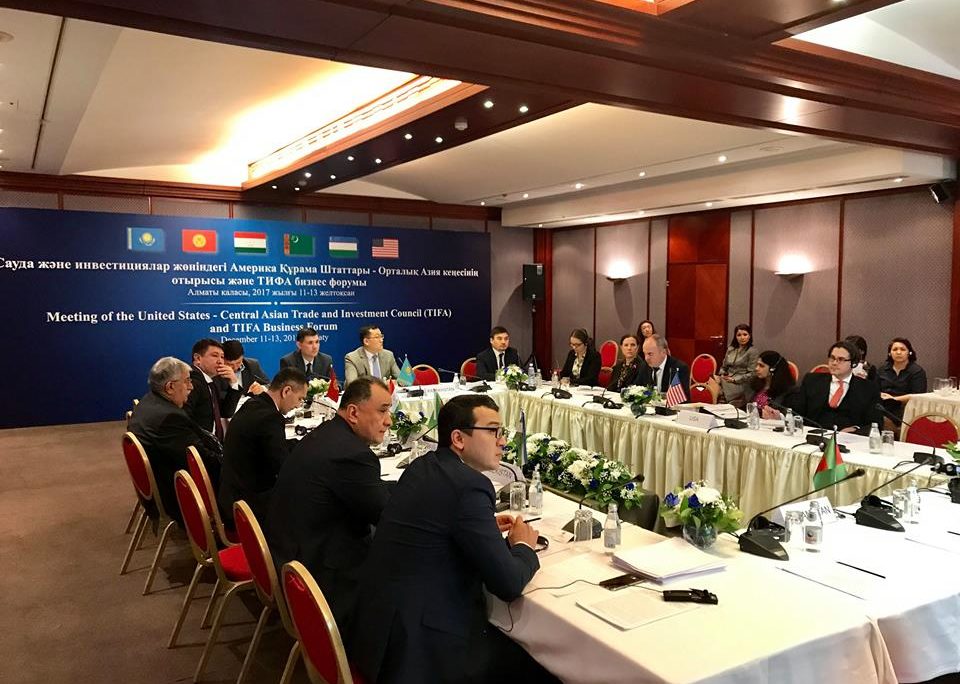 Almaty, Kazakhstan – Today, senior officials of the governments of the United States, Kazakhstan, Kyrgyzstan, Tajikistan, Turkmenistan, and Uzbekistan met for the Council Meeting of the U.S. – Central Asia Trade and Investment Framework Agreement (TIFA).  The government of Afghanistan participated as observers.The participants affirmed that the TIFA is a high-level platform for dialogue to strengthen trade and investment ties between the United States and the countries of Central Asia.

During the plenary meeting, participants discussed the trade, transit, and investment environment in Central Asia and the United States.  Participants focused on expanding fair and reciprocal trade and creating a welcoming environment for business in order to facilitate regional private sector activity. In addition, they discussed Central Asian exports under the implementation of the U.S. Generalized System of Preferences for developing countries.Under the TIFA Council Meeting, the Working Groups on Customs, Standards, and Sanitary and Phytosanitary Measures met on December 11. The expert-level working groups proposed using the following WTO agreements as a framework for further consideration of international best practices: the Trade Facilitation Agreement; the Agreement on the Application of Sanitary and Phytosanitary Measures; and the Technical Barriers to Trade Agreement. The groups also proposed identifying topics appropriate for considering regionalized approaches to trade-facilitating rules and procedures, such as harmonization or mutual recognition and obstacles to such consideration.

Further the participants proposed creating an Intellectual Property Rights Working Group, to strengthen cooperation, interaction and protection of intellectual property rights.During the TIFA Council Meeting, the participants discussed and agreed to these proposals and highlighted the importance of enhancing efforts to increase U.S. – Central Asia trade.

The Afghanistan delegation proposed to become a full member of this platform.

The participants agreed that the next meeting of the U.S. – Central Asia TIFA Council would take place in the United States on a date to be determined.

The TIFA Council expressed its deep appreciation to the Kazakh government for its hospitality.