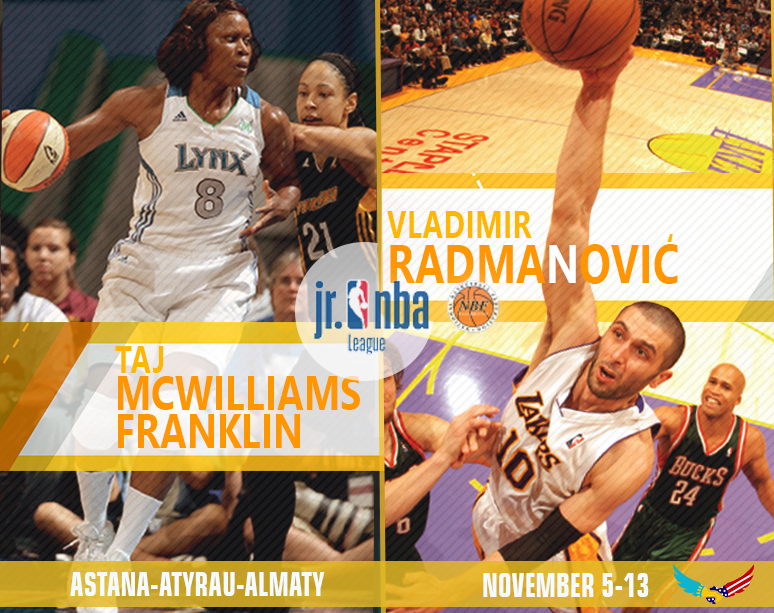 The U.S. Embassy in Astana will support the establishment of a Jr. NBA NBF KZ Basketball League, in a collaboration between the NBA and U.S. Department of State that has seen more than 80 basketball Sports Envoys bring basketball and the values of the game to nearly 50 countries since 2005.

“We are pleased to partner with The National Basketball Federation of Kazakhstan on the first two Jr. NBA leagues in the country,” said NBA EMEA Senior Director for Basketball Operations Neal Meyer.  “These initiatives provide a platform for boys and girls in Astana and Almaty to learn about the game and the values it teaches, including teamwork, leadership and respect.”

President of the NBF, Dimash Dossanov said, “The National Basketball Federation of Kazakhstan sees the popularization of basketball among school-age children as one of the country’s basketball development priorities. The joint project of the NBF and the Junior NBA in Kazakhstan is a great way to spark the interest of children in basketball. I am very happy that a new location in the territory of Central Asia has appeared on the Junior NBA map for the first time, and it was Kazakhstan that started the large-scale Junior NBA-NBF project. The NBA unites the best basketball players of the planet, and now Kazakhstan’s children have the opportunity to be closer to the legends of basketball and play in uniforms with logos of favorite NBA clubs.”

“I would like to congratulate the National Basketball Federation of Kazakhstan and the NBA on this wonderful program,” said U.S. Ambassador to Kazakhstan George Krol.  ”For the first time in Central Asia, youth will have the opportunity to participate in Jr. NBA leagues, where they will wear the jerseys of their favorite teams from the NBA. I remember  the profound impact  sports had on me when I was growing up. Kazakhstani youth will not only learn skills to help them become successful on the basketball court, but also will develop lifetime skills of teamwork, leadership, and a strong work ethic that will help them to be successful off the court as well. Sports also provide a great opportunity for people of different cultures and backgrounds to come together for a common purpose. I hope  this new partnership  will provide a spark for youth sports in Kazakhstan.”

The partnership sees both a boys’ and a girls’ league for children ages 10-13.  Both leagues feature 15 school teams from Astana and 15 school teams from Almaty, each representing one of the 30 NBA teams. In addition, each school will receive corresponding NBA branded kit for their games.

Similar to the NBA, the 30 teams in each league will be divided into two conferences and six divisions.  The program will take place from November to April, with the top eight teams from each conference qualifying for the playoffs.  The top two teams from each conference will then meet in the league finals held in the capital of Kazakhstan, Astana, to determine the first two Jr. NBA NBF KZ Basketball League champions.

The Jr. NBA, the league’s global youth basketball program for boys and girls, teaches the fundamental skills as well as the core values of the game at the grassroots level in an effort to help grow and improve the youth basketball experience for players, coaches and parents.  During the 2016-17 season, the NBA reached more than 18 million youth in 53 countries through its youth participation initiatives.

For more information about the NBA, fans can visit NBA.com, Facebook.com/NBA and @NBA on Twitter.  Fans can download the NBA App for news, updates, scores, stats, schedules, videos and more.

The NBA is a global sports and media business built around three professional sports leagues: the National Basketball Association, the Women’s National Basketball Association and the NBA G League.  The league has established a major international presence with games and programming in 215 countries and territories in 50 languages, and NBA merchandise for sale in more than 125,000 stores in 100 countries on 6 continents.  NBA rosters at the start of the 2017-18 season featured 108 international players from a record 42 countries and territories.  NBA Digital’s assets include NBA TV, NBA.com, NBA App and NBA League Pass.  The NBA has created one of the largest social media communities in the world, with 1.4 billion likes and followers globally across all league, team, and player platforms.  Through NBA Cares, the league addresses important social issues by working with internationally recognized youth-serving organizations that support education, youth and family development, and health-related causes.

About the National Basketball Federation of Kazakhstan