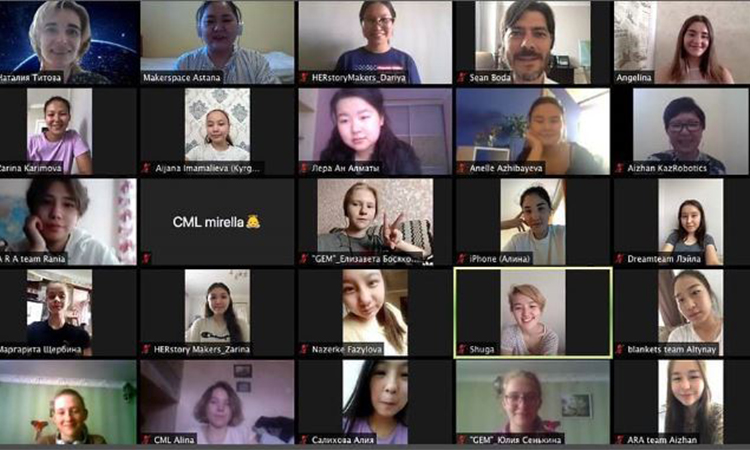 How did the first free online tech camp for girls go

July 27, 2020 – After two weeks of intensive and everyday virtual lessons MakerCamp was over. The camp was organized by the American Corner and MakerSpace in Nur-Sultan with the support of the U.S. Embassy and sponsorship of Chevron.

The girls learned to write the code of chatbots and websites, and also learned the graphic language Scratch. Invited experts gave lectures on project management, the role of creativity in the sciences and communication skills.

Initially, the camp was to be held offline in seven cities of Kazakhstan – in the capital, Karaganda, Pavlodar, Petropavlovsk, Uralsk, Aktobe and Ust-Kamenogorsk. However, due to the COVID-19 pandemic, the camp had to be held online on the ZOOM platform.

More than 100 girls from different cities of Kazakhstan, Kyrgyzstan and Uzbekistan, aged 15 to 18, took part in the virtual camp. More than 900 girls applied for participation. Classes were held daily on weekdays – in the first part they studied programming, in the second part, “soft” skills.

The final component of the camp was group work on social projects. Teams of 3-4 people created projects and presented them to the judges. The judges, among whom were the co-organizer of the Google Developer Group, representatives of the Kazakhstan Federation of Sports Robotics KazRobotics, the director and teacher of programming at the IT Princess academy for girls, the representative of the Chevron company and the founder of the non-profit organization TheShero Kazakhstan, selected three winning projects, which were:

Girls from Karaganda and Altai (formerly Zyryanovsk) presented the project “Radio in the head”. It is a dental implant that can correct hearing through bone conduction of sound and help the hearing impaired. An example was Beethoven’s type of “hearing” device, which clamped metal objects between his teeth to hear his instrument. At the presentation, the girls also presented a chatbot, which provides the user of this device with additional information and instructions.

A team of girls from Petropavlovsk, Aktau and Talas, Kyrgyzstan presented an informative chatbot that can diagnose depression and its early stages in adolescents. Girls conducted a study according to which about 20% of adolescents experience depression before reaching adulthood and 10-15% of them have some symptoms of depression. In the future, the team wants to turn their website into an educational platform where teens can get professional help for free from anywhere in the world.

The “Correct my language” project is an anti-racist chatbot that corrects vocabulary, which was developed by girls from Almaty, Karaganda and Nur-Sultan. It is a smart keyboard that recognizes and notifies the user of offensive language. With the help of their project, the girls want to reduce cyberbullying.

On Monday, a farewell meeting took place, where the winners were announced, and digital certificates were presented to all participants. At the meeting, the participants shared their impressions and the press attaché of the U.S. Embassy Sean Boda congratulated the girls on the successful completion of the classes.

Zhania Rakhat, 16 years old, Nur-sultan: “At first I did not know anything about programming, and I was not sure whether I should connect my future with this direction. Now I plan to go deeper and study this area. At the camp I met many wonderful and versatile participants. MakerCamp is very inspiring to keep going and not stop at anything. ”

Makercamp for Girls aims to inspire and motivate girls through intense hands-on science lessons, hands-on coding skills, and their own technology ideas. The project has been implemented since 2017 and was first held in Almaty.