Home Home | News & Events | Voices from Xinjiang: Only then did we start to live decently 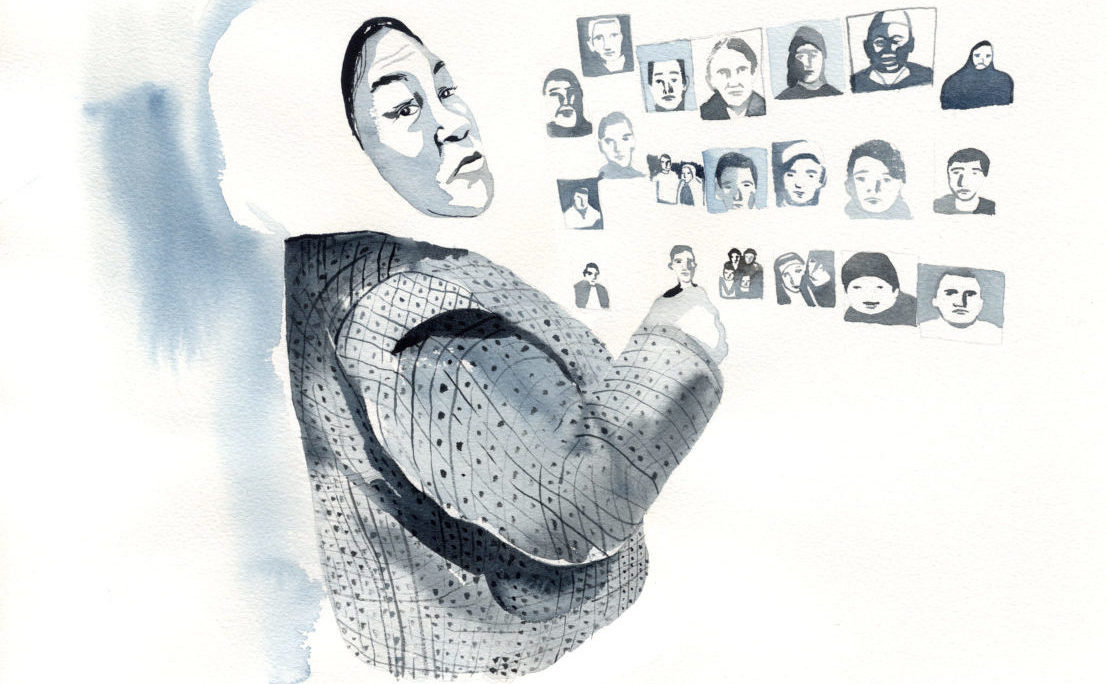 A small hamlet called Karagash is where I was born, in Ili Kazakh Autonomous Prefecture. A pasture for cattle. My mother died when I was two years old. I heard my father was a party activist, but—let me be frank—I never knew him. After my mother died, my father remarried and forgot all about me. I was sent to live with my mother’s relatives. I lived with them until I was five. Then they didn’t want me either. I lived here and there, with people who knew my mother and took pity on me. An orphan. I’m illiterate, to tell you the truth. There was no one to support my education.

In 1975, when I was twenty-one, I met my husband. He was an orphan like me. His relatives had moved to China during the famine, before he was born. When they moved back to Kazakhstan, he was left behind without anyone. His name was Rakhymbergen Kittybay. He died last year, on September 9.

I was pregnant eight times. My first four pregnancies, including one set of twins, were unsuccessful. Four sons, one daughter—I lost my first five children. Then my son was born. Among Kazakhs, when you have miscarriages, or when babies die one after another, a new child’s life is understood to hang by a thread. So when my son was born, we gave him immediately to our neighbor. The neighbor kept him and fed him for the first week of his life. We refused to see him at all. Then we bought our baby back. We brought presents, clothes, firewood. We passed the presents through our neighbor’s door and took the child back through the window. It worked. After that, I had more children and they all lived. But until our firstborn son was twelve, my husband held him like this—like an egg. He was always hanging on his father’s neck, even when eating. We were so afraid to lose him.

They were difficult times, those early years of our marriage. I would have my son strapped to my back all day while I worked, cutting cornstalks, threshing wheat. My husband did the same. We were sharecroppers. It was backbreaking work. When we had our second child, I would tie them both to a post in the field like sheep so they wouldn’t wander off.

In the ’90s, the state allocated some land to us. Only then did we start to live decently. For the first time in our lives, we didn’t go to bed hungry. We planted wheat, corn, soy, sometimes beets for sugar. Our own crops, on our own land. After the border opened, my husband went to Kazakhstan to try to find his family. He managed to find his mother. His father had already died. From then on, he stayed in Kazakhstan to look after her. He would come to China to visit for five or six days at a time, then go back. I was raising my sons alone. His mother didn’t die until 2007, at the age of 103.

After my first son who lived, I had three more sons all in a row. The three eldest all work together in construction, building houses from the ground up. The fourth was still a boy when we moved to Kazakhstan, but the elder three all made lives for themselves in Xinjiang. All of them married. In fact, all of them found Uighur wives. It’s true we lived in an area of mostly Uighurs, but there was another reason: We were poor. We had no savings. When you marry a Kazakh girl, you have to pay a dowry. We couldn’t afford it. Uighurs don’t have dowries. So one by one they stole their Uighur wives and we didn’t pay a penny. We bought only their clothes.

When they started arresting people, my three eldest sons were taken first. They took all three on the same day, last February. They lived together in the same village in Kunes. The wife of my second eldest son called me to say they’d been arrested. The next day, she called me again. Mama, she said, they took my sister. Your daughter-in-law. They took Toktygul. They had arrested my eldest son’s wife. But I don’t know [breaks down crying] what happened to my grandchildren. They had five children. I don’t know where they are.

On hearing the news, my husband came down with a migraine. The next day, when our daughter was taken, it got worse. But we decided to wait and see. I told him to hold out. When we hadn’t heard anything by the end of the month, I called the administrator of Karagash, a man by the name of Nurlybek. I asked Nurlybek what had happened to my sons. Where are they? Where is my daughter-in-law? They’re being reeducated, Nurlybek said. He told me my other two daughters-in-law had also been taken to the reeducation camp. They, too, were being reeducated. Political studies was how he described it. I have fourteen grandchildren in China. Some are very young. I asked Nurlybek where they were. Where are my fourteen grandchildren? They are all studying, he said, and hung up.

After that, my husband could no longer walk. He lay in bed. From the end of February, he never walked again. I took care of him. I couldn’t go anywhere, couldn’t leave the house. He got weaker and weaker. Months went by. We didn’t tell anyone what had happened to our family. Then, on September 9, 2018, he had a bout of strength and shouted all his sons’ names: Satybaldy! Orazzhan! Akhmetzhan! He turned to me. I am entrusting my sons first to Allah, then to you, he said. As for me, I am finished. He died later that day, at 5:00 p.m.

After he died, I spent ten days at home. I didn’t say a word to anyone. Then I decided to find my children. I came to Atajurt and met with Serikzhan. Others wrote letters for me because I can’t write. The letters explain that my children are gone, and that my husband couldn’t stand to see his sons and daughters taken away. That it had killed him.

Only my youngest son is here in Kazakhstan with me. But even he’s married now, and their apartment is too small for me. I live alone, and I don’t have a pension here, so I have to work. My youngest son helps. He goes in together with a dozen other people to hire a truck to bring vegetables out of China. I take my share and resell them at the bazaar. Cabbage, cucumbers, tomatoes, lettuce greens. I can’t afford a stall. I sit on the street with my carrots and cabbages. But my youngest son is good. He doesn’t drink, doesn’t smoke. He used to drink before, but he gave it up. He has a family to take care of.