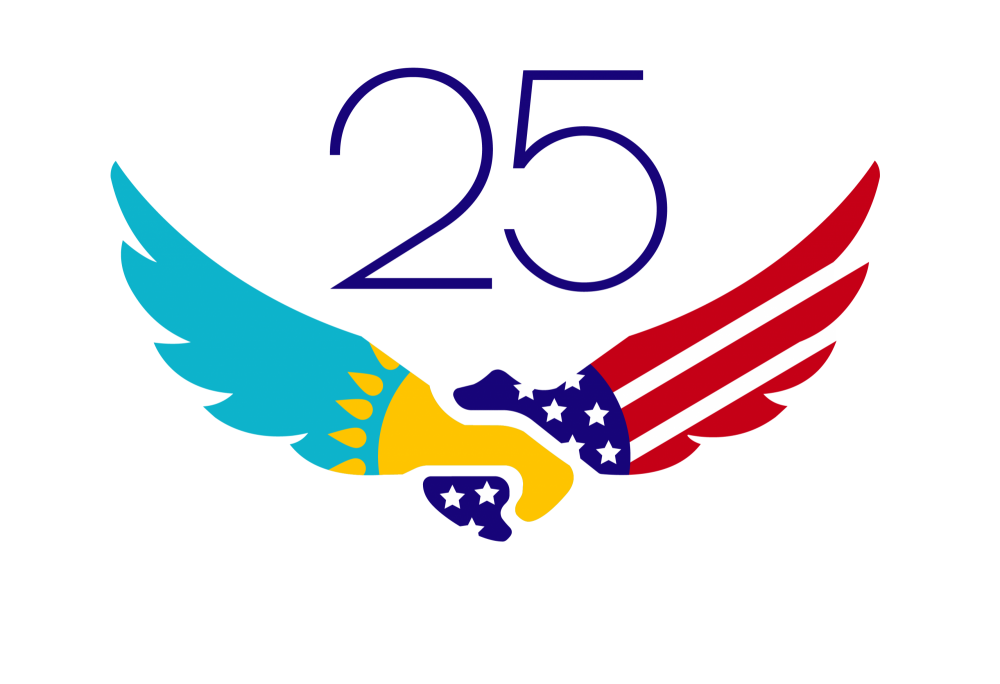 A CAMPAIGN TO CELEBRATE 25 YEARS OF U.S.-KAZAKHSTAN RELATIONS

The U.S. Mission to Kazakhstan is proud to announce the 25th anniversary campaign celebrating relations between the United States and Kazakhstan, highlighting achievements in a range of areas and featuring three main themes: innovation, friendship, and partnership.

25 Years Together in Innovation

TechWomen: An international delegation of leading women in the fields of Science, Technology, Education, and Math (STEM) who participated in the U.S. Department of State’s TechWomen program will visit Astana and Almaty in March. The delegation will meet young innovators, entrepreneurs, and educators to advance the role of women in technology.

TechForum:  Following on three successful TechForums in Almaty, Astana will host its first such event in June, designed to train and inspire young Kazakhstani communicators and entrepreneurs in how technology can assist them in innovative ways.

Maker Space: The U.S. Mission will support science and tech labs, so-called “Maker Spaces” at American Corners in Almaty, Astana, and Oskemen, facilities that provide opportunities to learn new skills using high-tech equipment, including 3D printers. In addition, a “Mobile Maker Space” will be launched in Almaty to take the opportunities to underserved communities.

“Love to Code” Tech Tour:  The U.S. Mission will support the Kazakhstani organization “Love to Code” as they teach coding skills to young students at selected American Corners.

Business Training in United States:  For the 25th anniversary of the U.S. Department of Commerce’s Special American Business Internship Training Program (SABIT), 14 Kazakhstani professionals will travel to the U.S. to for a program on “Startup Business Skills and Management.”

25 Years Together in Friendship

Community Boxing Exchange with Mohammad Ali Center:  A delegation of Kazakhstani boxers and trainers will travel to the U.S. to meet with American counterparts and discuss best practices in community programs. The Mohammad Ali Center will organize a program in Ali’s hometown of Louisville, Kentucky.

Music and Dance: “The Exchange,” an American acappella musical group, will collaborate with local artists, engage youth, and perform in Astana, Kyzylorda, and Almaty in late March and early April. Later, there will be joint-performances of the American “Island Moving Ballet Company” and Kazakhstani Samryk modern dance companies in Astana, Almaty, and Shymkent.

National English Teaching Conference:  In Oskemen, the U.S. will support the annual conference of the Kazakhstan Teachers of English Association, bringing together hundreds of teachers from across the country to discuss new ideas and engage with experts in the field.

US-KZ Fest:  Held in Almaty in August, the festival will feature stories, music, films, and culture presented by Americans and Kazakhstanis who have helped strengthen the relationship between our peoples, including former American Peace Corps volunteers and Kazakhstani alumni of U.S. government sponsored exchange programs.  The event will be open to the public.

Global Health:  The U.S. Centers for Disease Control and Prevention (CDC) will launch the Global Health Security Agenda in Kazakhstan. This is a multilateral, multi-sectoral initiative to prevent, detect, and respond to infectious diseases.

25 Years Together in Partnership

Creating a Relationship: The U.S. Mission will facilitate a panel discussion on challenges our countries faced in the early days, featuring the first U.S. ambassador to Kazakhstan, Bill Courtney.

Through the Eyes of Ambassadors: A video history of the U.S.-Kazakhstan relationship, as told by former U.S. ambassadors to Kazakhstan, will be released in the spring.

Ultra-marathon for Regional Cooperation:  Highlighting increasing regional trade and developing transportation infrastructure, American ultra-marathoner Dean Karnazes will run from Samarkand to Shymkent, through Taraz to Bishkek, concluding at a finish line in Almaty in June.

Partnership Conference:  This event will feature senior government officials from both sides and include discussions of what the U.S. and Kazakhstan have accomplished together over the past 25 years, as well as panels forecasting what the partners may achieve over the next quarter century.