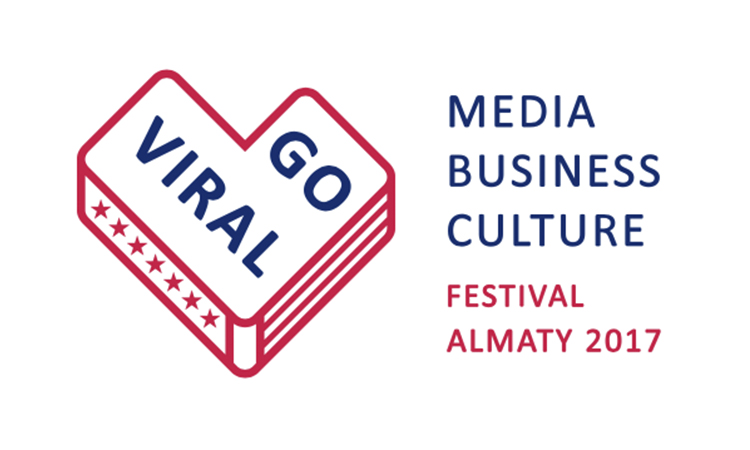 ALMATY, 20 April – The U.S. Consulate General in Almaty and a team of leading Kazakhstani innovators in media, business, and culture are announcing an opening of registration for Go Viral: a three-day festival that will take place in Almaty Towers from 16-18 June. Over three intensive days of music performances, film screenings, workshops, and keynote talks, 1000 innovative thinkers from Central Asian region will learn how they can make their own ideas go viral to inform, entertain, and market to new audiences.

The mission of the festival is to empower journalists, entrepreneurs, filmmakers, and musicians to leverage social media and technology to connect with the world. Go Viral festival will feature music, films, talks, discussions and master classes from leading trendsetters from the United States, Central Asia and Eastern Europe, who will share their secrets to reaching global audiences.
The festival will shed the light on questions like: What makes ideas and products spread virally? What is that power of awe that makes some content go viral and other content flop? How do you monetize content? How can news reporting entertain as well as inform?  How can you differentiate genuine content from fake stories? How do you get your creative content seen and heard around the world?

The format of the festival will feature a robust schedule of interactive presentations as well as entertaining performances throughout each day, including Keynote talks, Workshops, Pitch prep and Delivery, Music and Film, Video Conferences, Networking and Mentoring, Panels and Round Tables, Breakout Rooms, and a TechLab. Registration is free, but limited to only 1000 selected participants.

American and Kazakhstani speakers and performers will be featured in three directions:

To apply to attend, applicants over the age of 18 may register via the Go Viral event web site www.goviral.kz.  The deadline for registration is May 30, 2017, to be considered for the June 16-18 program. Go Viral updates will also be posted on the site, as well as on Facebook: @GoViralkz, Instagram: GoViral.kz, Twitter: @GoViralkz and YouTube: GoViralkz using #GoViralkz