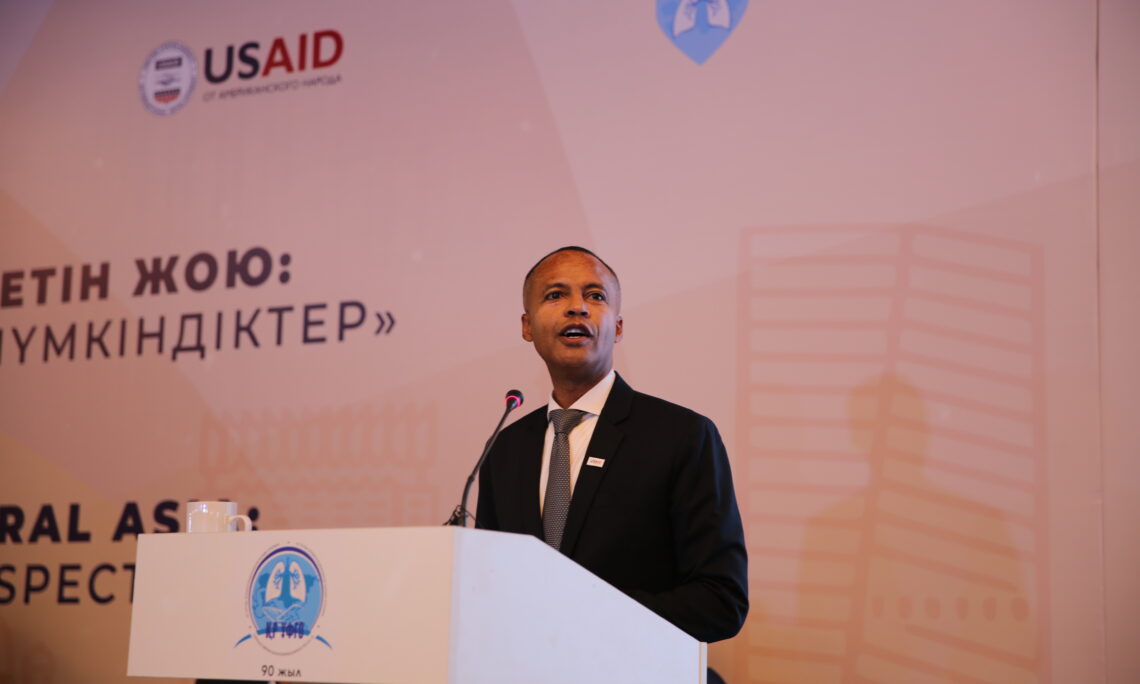 Almaty, Kazakhstan, September 22, 2022 – Today, the Republic of Kazakhstan’s Ministry of Health and National Scientific Center of Phthisiopulmonology, with support from the U.S. Agency for International Development (USAID) and the Global Fund to Fight AIDS, Tuberculosis, and Malaria (GFATM), kicked off the sixth international conference “Eliminating Tuberculosis in Central Asia: Best practices, challenges, and perspectives.” Dedicated to the 90th anniversary of the National Scientific Center of Phthisiopulmonology, the two-day event focuses on reducing drug-resistant tuberculosis (TB) in Central Asia and brings together more than 350 government officials, including the Deputy Prime Minister and the Minister of Health of the Republic of Kazakhstan, directors of Central Asia TB Programs, representatives from Ministries of Health from Central Asian countries, key stakeholders, and international partners including the World Health Organization (WHO), GFATM, and Stop TB Partnership.

In his opening remarks, USAID Regional Mission Director, Lawrence Hardy noted, “USAID, through its implementation of the Global Accelerator to End TB, reaffirms its support and partnership with Kazakhstan’s National TB Program (NTP) to provide universal access to faster TB diagnosis and treatment, and strengthen the role of community-based organizations in supporting TB service delivery.”

USAID has nearly three decades of collaboration with Kazakhstan’s NTP and supports the overall goals of its National Strategic TB Plan 2021-2025 to reduce the country’s TB incidence and mortality. USAID’s Global Accelerator to End TB strategically focuses on providing technical expertise and support that strengthen and expand quality standards of TB detection, treatment, and care at all levels of service delivery – from the government level to the community level – to decrease the burden of TB. Over the years, countries in Central Asia have strengthened their national TB service responses through solid political and economic commitment. Still, the high burden of multidrug-resistant TB (MDR-TB) and extensively resistant TB (XDR-TB) remains a critical challenge to effective TB control in the region.

Among the WHO’s list of 30 countries with the highest burden of MDR-TB, four are in Central Asia. Strengthening commitments and investments that break down barriers to detection, access, and treatment are crucial in the context of COVID-19 which has put global progress to end TB at risk.