Home Home | News & Events | Voices from Xinjiang: If i returned to China, my daughter would be released 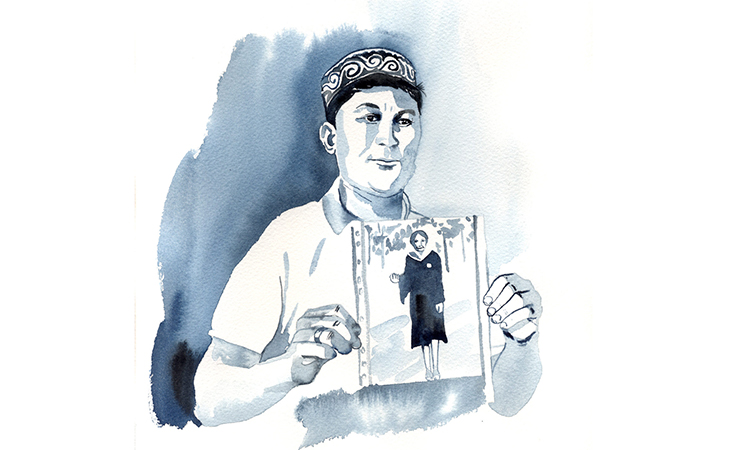 Kulzhabek is wearing a blue takiya embroidered with swirls of gold. Beneath it, the face of a worried father.

When my daughter was arrested, my niece told me not to call her. I’ll call you, she said. I was living here in Kazakhstan. My niece was in the village where it happened—the same village I come from, in China. For a few days, she updated me by phone. First she said the police were only checking Saule’s documents. I still hoped everything would be fine, even with my daughter in jail. On the third day, she was taken to the camp. My niece accompanied her there. That’s the only reason I even know what’s happened to her.

You see, back when I lived in China, I worked at the Oyman Bulak mosque. My first job was as the muezzin. I made the call to prayer five times a day. Over the next eight years, I eventually worked my way up to imam. The state itself sent me to be trained! That’s what makes all this so unbelievable. It was an official position. I was part of China’s official Islamic Association. The authorities said we could practice Islam and, at first, we could. But in April 2017, the situation changed. They started sending imams to camps. Then they began sending those preaching Islam to camps. Then anyone who knew anything about the Koran. Finally, they began arresting people just for having a Koran at home, or even for praying.

When it became clear I would be detained, I decided to flee and join my daughter in Kazakhstan. Up until that moment, I’d always done as I was ordered. You get a lot of orders as an imam in Xinjiang! I would take part in political classes whenever they asked, sometimes for weeks at a time. I always complied. But this time I was in a panic. I left my property, my home, my sheep and cattle. The only thing I thought to do was to hire a caretaker to look after my livestock.

When I got to Kazakhstan, the caretaker I’d hired called me. The local police had broken into my house. They were looking for forbidden books, he said. They wouldn’t have found any. All my books were stamped with the government seal of approval. But the call confirmed my fears. They really had come for me.

My daughter had graduated recently and found her first job at a corporate firm, a joint Chinese-Kazakh venture. The firm had her traveling between Kazakhstan and China. She had a Chinese passport and a Kazakh visa. It never occurred to us that anything might happen to her.

For a little while, my niece was keeping me updated. Even then, we didn’t dare speak of Saule directly. Speaking in code, my niece had told me my daughter was working as part of the camp system, possibly as a teacher. But I’ve lost contact with my niece. It’s been three or four months since we’ve spoken.

Now, after months without news, I just recently got a letter from my daughter’s colleague. Their firm had become concerned with her case. They managed to send a colleague to the camp to speak with her. In the letter, my daughter told her colleague she felt completely brainwashed. She said she felt like she had been born in that place, like she’d spent her whole life in the camp. She said she could barely remember her family. The colleague’s letter was sent to me here in Kazakhstan, and included another new piece of information: if I returned to China, my daughter would be released.

Why do they care about me? I’ve heard each village has to meet a quota of how many people are sent to each political camp. Most people are taken into the camps for religious knowledge or for having relatives in Kazakhstan. I fall into both categories. I imagine I’d be useful for filling those quotas. And not only was I an imam, I overstayed my visa by a year. I was supposed to go back to China one month after I came to Kazakhstan. I violated the terms of my visa. If I go back, I’ll be put on trial. When my daughter’s firm inquired at the camp to ask why she was being detained, they received the following reply: it’s not about her; it’s about her father.