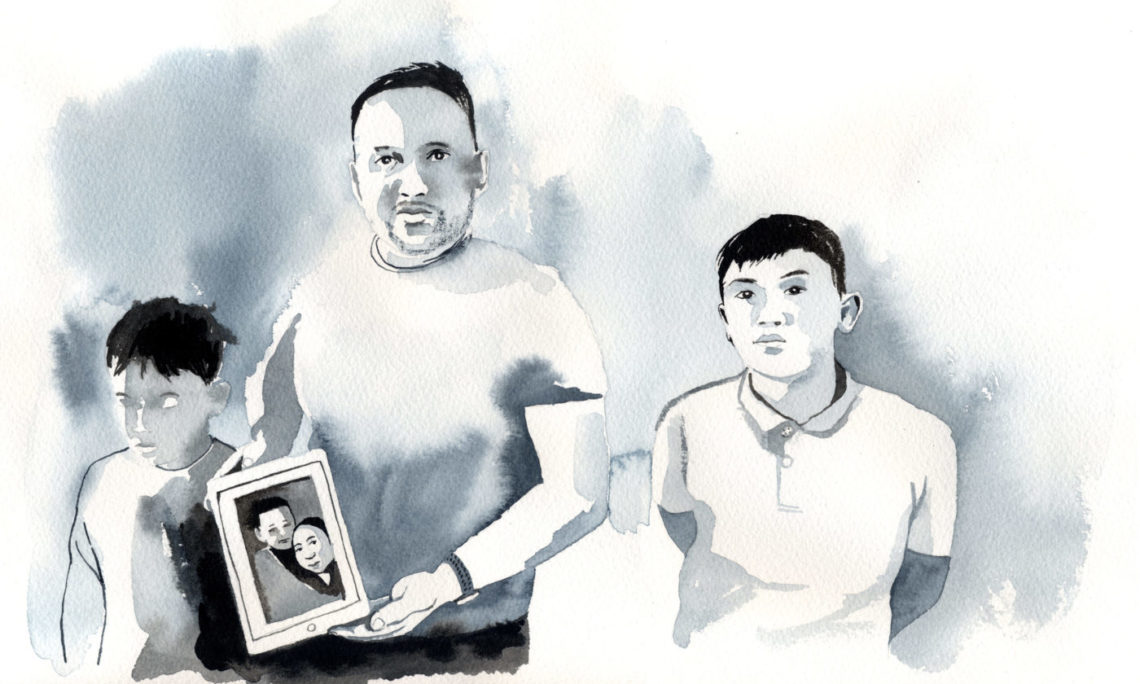 Zhumugali sits between his two sons. Every so often, he reaches out to touch the younger one. The older one is brooding. On Zhumugali’s T-shirt, a phrase in English: Head for the Hills.

My wife is a housewife. She’s never worked. I think the only reason they’re holding her is to get to me. When I lived in China, I practiced Islam. I was a devout Muslim. You know, there are many types of Muslims in the world. Well, I was a typical one. A Kazakh Muslim. I follow the path set by the Spiritual Administration of Muslims of Kazakhstan. I’m not against the Chinese government. I don’t call for it to be overthrown. I know there are Muslims who call for this, but I’m not one of them. I can’t understand what they want with me. But I’ve heard they keep a list of those who practice Islam. And I didn’t just practice; I worked at the local mosque: I helped with its construction. I was an assistant to the imam.

In May 2017, our wife took our one-year-old to China to see her relatives. She spent a week there. Then, at the airport in Ürümqi, they wouldn’t let her board the plane. They took her passport. Then they put her under house arrest. Now, since she doesn’t have her passport, she can’t leave, can’t go anywhere. It’s been almost two years. The authorities have told my wife I should come back to China with my sons. The first time they told her this was a couple months ago. She can’t say so openly, but I could feel as she was saying this that she didn’t want me to come, that she was afraid. I could hear it in her voice over the phone. But all she said was that this is the reason they’re not letting her go.

Two of my sons and my older brother, Ozabled, who is mentally disabled, are here. We’ve always cared for him. So I have two kids and my brother to care for, and for two years now I haven’t had an official job. I’ve been working as a taxi driver. Of course, my younger son here barely remembers his mother. He wasn’t even six when she left. And look at the other one—the weight he’s lost!