Home Home | News & Events | Voices from Xinjiang: It would have been nice to know my last day. 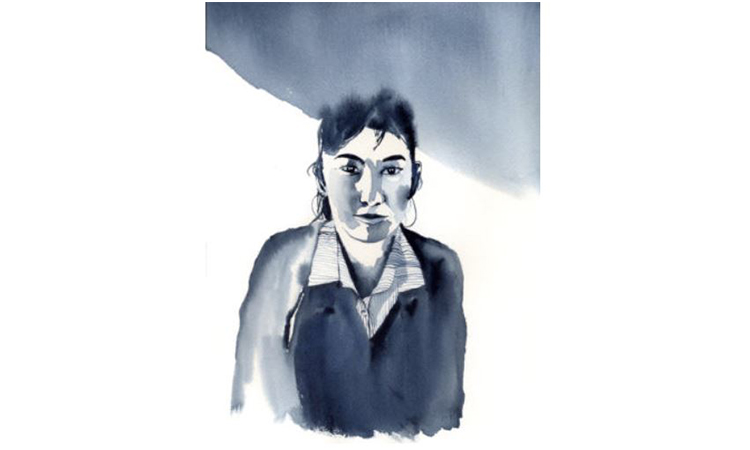 Rahima works in a clothing workshop.

Yes, I was in the camp. For more than a year…

We were thinking of our children, you know? And their future. That’s why we moved here. We came because it’s the motherland. All Kazakhs should return to Kazakhstan! That’s what we were told. So, in 2013, we came: my husband and I and our four little children—two daughters and two sons. But since I had a permit for visa-free travel, I went back and forth. My parents were still in China, so I’d go to see them. And until 2017, there were no problems. Crossing the border was easy. That summer I even worked at the border, at the International Centre of Boundary Cooperation at Khorgos. It’s the free-trade zone. Do you know it? I was working as an interpreter at one of the Chinese bazaars: the Yu bazaar. Kazakhs would travel there to buy Chinese goods. I worked as a translator. When my children were about to go to school, I went back to Almaty. In August 2017, my parents called me back to China. The authorities had been to see them.

Ours is a very small village in Tekes County. It’s simply called Military Horse Farm. When I arrived, the authorities wanted to see me. They took a blood sample, my fingerprints, recorded my voice on a computer, took my picture from the front and in profile, then let me go. At the time, they didn’t tell me what it was for. I didn’t understand it. They took my phone number and I went back to Kazakhstan. Later that month, they called me and said I had to come to China again. At first I said no. Three days later, my parents called. The authorities had been to see them again. So, you see, I had to come.

That October, I crossed the border, spending the night at a guesthouse at Khorgos. I reached my village the next day and spent the night at my parents’ house. On the morning of the sixteenth, the authorities showed up. They told my parents that if I didn’t come with them, we’d be in violation of some law. They took photos of my mother and father, they photographed the house, then they took me away. They didn’t tell me they were taking me to a prison. They said I just had to answer some questions.

I was taken to prison in what was, for me, a new mode of travel: a police car. The guards didn’t say anything, didn’t explain anything. As I was about to enter the prison, they cuffed my hands and my legs. That’s when I realized I wouldn’t be going back home.

There were a lot of us in the prison. There were twenty girls in each room and there were many rooms. We sat, stood, and ate in this room. We slept there too. There was no exercise, no yard. We were in the room day and night. The guards weren’t violent. They didn’t beat us for nothing, but we couldn’t leave, and if we didn’t follow instructions quickly, they shouted and cursed at us. Eventually I got to know a few of the other women. Some I’ve kept in touch with, if I was able to find them after our release. Some of them spent a long time there. As for me, I was in prison for only seventy days. That December, they took me from the prison to a camp.

They called it a Professional Reeducation Center. We took Chinese-language lessons from morning till evening, every day. We also studied domestic politics. I already speak Chinese—I worked as a translator—so these lessons weren’t useful for me. But forget about me; there were people in the camp who were college graduates! Who am I to complain? What were these people doing there?

All this time, I didn’t know what was going on. I wondered: What did I do wrong? What crime have I committed? Why am I here? When I asked at the camp, they told me I was here because they’d found WhatsApp on my phone. You are guilty of using WhatsApp, they said. They claimed it contradicted the law. It’s a foreign application: Why are you using it in China? I told them that I lived in Kazakhstan. I bought the phone there! I tried to explain. But of course it’s clear to me now this was just a pretext. If it hadn’t been WhatsApp, they would have found another reason. Everyone there had his own story. Some were similar to mine. Some said they had been charged with reading namaz or studying the Koran. Some wore the hijab. I heard their stories when we were in our bedroom together, another large room that housed twenty or thirty people. We could talk inside this room. Outside, it was forbidden to make any noise at all.

The authorities in the camp were very strict, much worse than in the prison. They treated us not like humans but like animals. They would beat us, interrogate us, punish us by making us stand for hours, call us bad names, shout at us. Once, we were climbing the stairs to go to class as a group, and I felt ill. I’d had a headache that day. I got dizzy and stumbled, then began to fall, and someone—one of the guards—stuck me with an electric prod. My whole arm went numb. Another student had to hold me up so I wouldn’t keel over. Then we had to keep moving to get to class.

These prods, they used them constantly.

In the morning we would drink boiled water, one glass, and eat a plain steamed bun. For lunch we would eat Chinese cabbage boiled in water, simple as that. For dinner, we often had the same thing. There was no meat. Maybe once a month we would have plov.9

It was the same situation for the entire year. We were never told when we would be released, if ever. We went to class every day. Once a week we were given an hour to exercise in the fenced yard outside. It would have been nice to know my last day—to be able to look forward to it—but they never told us. Each day was exactly the same. Some people in the camp had already been there a year by the time I arrived. I suspect some of them are still there. Some, I heard, were later sentenced to prison terms between five and twenty-five years. They claimed we were being trained, but I think their only goal is to destroy religion, to destroy nationality, to destroy tradition.

While I was in the camp, starting last August, my husband and children started to make petitions and videos about my case. They began to put pressure on the authorities. I think it’s because of the petitions, because my case was made public, that I was able to come back. It all happened suddenly one day. A guard came into our dormitory room and read my name aloud. Four of us were named, and they told us we were going to return to our homes. I was sent to my parents’ house first, but even then, for a while, they wouldn’t give me my passport. My family had to keep complaining. I got out of the camp in October and was finally able to leave China in December. So I’ve been home for only five months.

Except for the day I arrived and the day I left, only one day in the camp was different. That was the day of the open trial. They brought in seven women from a nearby prison who had been charged with gathering in a private home to pray together. During Ramadan, in the evening, you celebrate auyzashar,10 and the seven women had organized a meal and a prayer. That was their crime. At the trial, they read these accusations and sentenced each of the women to seven years in prison. They called it open court. None of the women spoke.