Home Home | News & Events | Voices from Xinjiang: The weather is getting bad 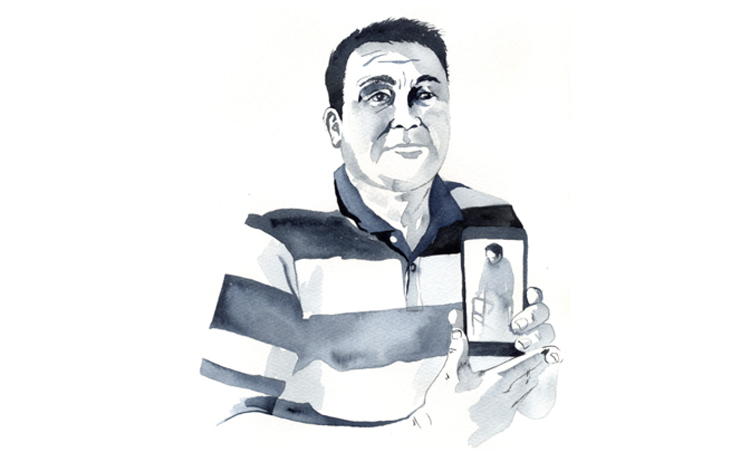 Bilimbek comes from the village of Shunkyr, in the Altai Mountains, near Mongolia. There, he studied water engineering. In Kazakhstan, he is a herder.

My wife was a schoolteacher, teaching Chinese calligraphy to Kazakh children. Most of her work was in China, so she kept her citizenship when we moved here with our daughter. She would live in China during the school year and then come stay with us during the summers and winters. It was easy for us to visit her, too: we just crossed the border.

Bakytgul and I have known each other since we were children in the same village in China. We’ve been married thirty years. Until 2012, we had a house together there. Then I sold it and she lived in a dorm with other teachers. Even then, we felt that China’s domestic policies were starting to tighten. You could feel a change. We wanted to get out. We hoped she would settle here soon, but for the time being we needed the work. My daughter is in her seventh year of medical school. She’s training to become a pediatrician. We were saving up, preparing to start our lives here as a family.

So my wife kept working, despite her age. Two years ago, she had surgery on her hip. She has problems with her coxal cavity, where the pelvis meets the femur. Not enough fluid. She had her joints replaced. She had to use a cane after that, and for a long time she was convalescing at a relative’s home in China. [He shows a picture on his phone of a frail woman dressed all in pink. She is using a walker.] She was recovering for almost a year. In April 2017, she went back to the dorm and back to work.

That’s when she was detained at a camp.

Now it’s been four months and I don’t know what’s happened to her. I don’t talk with her directly, but my sister lives nearby. We use the same code words as others do: What’s the news? What’s the weather? My sister was her colleague. They worked together in the same school. We’re in contact, but I don’t dare call her. Last time I heard from her was ten days ago. I just have to wait and hope she’ll call. She could be in a camp herself now. They all say it’s inevitable. My relatives all agree. Eventually, everyone will be put in a camp. All my family members are just waiting to be placed in a camp. The weather is getting bad, they say. We’ll soon be going to study.