Home Home | News & Events | Voices from Xinjiang: They simply said it was the wrong thing to do, to go to Kazakhstan and have a child 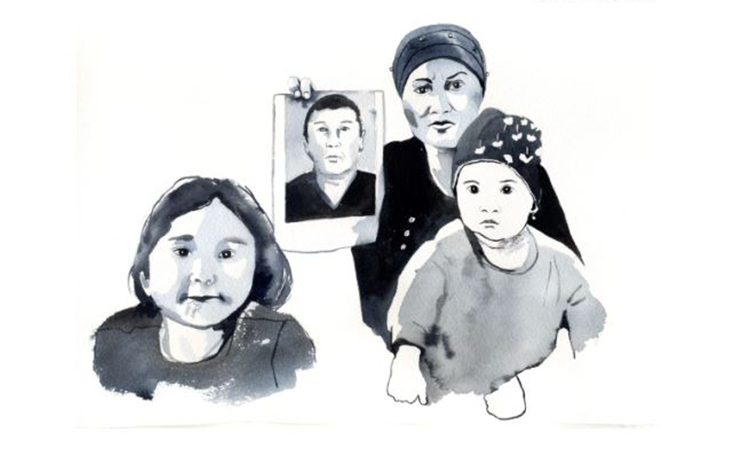 Bikamal has three children. The youngest two are in the room with us, crawling over everything.

In China, my husband was working at the Karamay oil fields. He’s a steam worker, generating steam for the oil pumps.

When he retired, we moved to Kazakhstan with our two children. Then my daughter was born here, in December 2016. In May 2017, when she was six months old, his oil field boss called and said he had to come back to China. There was no reason. You have to visit us, they said. Just come. He did as he was told. As soon as he crossed the border at Khorgos, he was taken away. First they took him back to the oil fields. From there, they took him to a reeducation camp nearby—the Maytau camp. The police brought my husband’s bag to his sister’s and told her they were interrogating him. She knew this meant he was heading to study.

It’s been two years now and he hasn’t been released. I heard he was transferred to a second camp, and as far as I know, he’s still there. The irony is that not long before he went to China, he’d submitted our paperwork for Kazakh citizenship. As of September 2017, we’re all Kazakh citizens! But I can’t even tell him. I have no communication with my husband. Last winter I heard that my mother-in-law had a meeting with him at the camp. But there was a mesh screen between them. They could speak only by phone. I asked her why he was detained, but no one knows. We don’t have any debts. We have no legal issues. I just can’t think of a reason.

My relatives did tell me this: They said officials came to my husband’s sister’s house and told them I was as guilty as my husband, due to the fact that I gave birth to my child in Kazakhstan, and implied that if I came to China, I, too, would be detained. They simply said it was the wrong thing to do, to go to Kazakhstan and have a child.