Home Home | News & Events | Voices from Xinjiang: We were burning everything at night 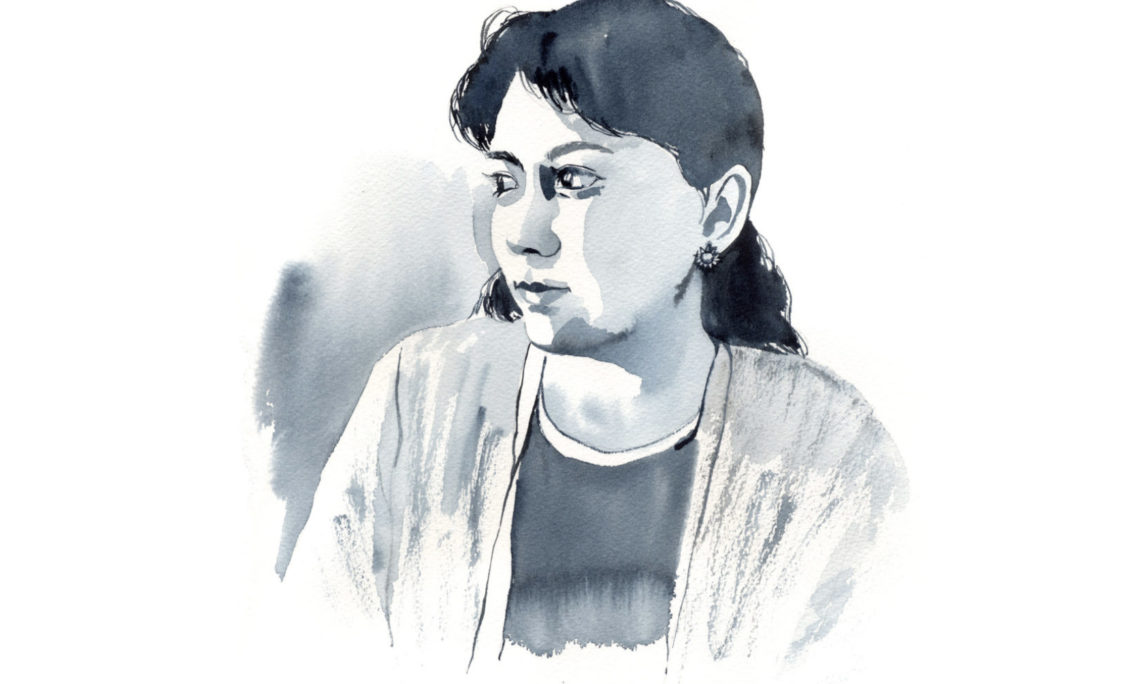 How did we meet? It was in a café in Almaty. March 8—International Women’s Day! [Laughs] He’d been living in Kazakhstan for a year. We introduced ourselves and exchanged numbers, and later he called me for a date. I was a college student at the time. I studied engineering at the Almaty University of Power Engineering. I’m a thermal engineer by training.

My husband is Uighur, like I am, although he was from China, a foreigner. When we got married, we didn’t bother to register officially in Kazakhstan. We just went to the mosque. The imam there married us.

A year later, we had a son. We were living in Chundzha, near the Chinese border, and I can tell you, there’s no great demand for my specialization out there. I couldn’t find a job. I worked with my husband, importing fruits and vegetables from China and selling them, wholesale and retail, in Kazakhstan. But business was bad. Then, in 2013, I got pregnant again. We decided to try our luck in China.

For the next four years, we lived mostly in Ürümqi. Then we moved to Ghulja, in the city, where his family lived. We already knew about the camps. We knew about the arrests. We had lived for a month in Kashgar in 2016, fixing up a house my husband’s family owned, to rent it out. When we got to Kashgar, we were shocked. They were stopping cars at every corner, checking our phones, coming into our homes to count the number of people inside. We couldn’t believe some of the rumors we heard. People getting detained for having photos of Turkish movie stars on their phones, new mothers separated from their babies and forced to work in factories like slaves.

Things kept getting worse after we moved to Ghulja. Teachers at my son’s school would stop by our house to warn us not to pray in front of him. It turned out officials were interrogating children alone at school, asking whether their parents prayed. Praying itself became grounds for detention. I had to stop wearing a headscarf, of course. Even old women had to go bareheaded. I took it off and—as you can see—I’m not wearing it now.

In Ghulja, every Monday, every resident of our district was required to come to the district office, raise the Chinese flag, and sing the national anthem. They would take attendance at this meeting, so you had to go. Sometimes there were announcements. One Monday morning, they told us we were now forbidden to own Korans at home, or any book with Arabic script. So I went home and burned our Koran.

We were living in fear. Everyone was afraid of the police. If someone knocked on the door, we were frightened. People wouldn’t greet one another in the street anymore. What if their relatives had already been taken to a camp? How could you know who was safe to talk to and who would get you in trouble? It might then be asked of you: How do you know this person?

The local police liked to say that they were watching us through their satellite system. We know what you’re up to in your kitchens, they said. We know everything. We had a friend at the time. A police officer told him that special equipment was installed that allowed them to see right through walls into a house, and that nothing could be concealed. Who knows what’s true anymore? So we were burning everything at night—Korans, prayer rugs, traditional clothing. We burned them at night because we were afraid the satellites could see us during the day.

As a foreigner, of course, I was interested in politics, in the news, but we had to destroy our phones. We were too afraid. I was afraid they would see what websites I visited. I’d already deleted all the foreign apps on our phone, even the little games my children liked. Then we got rid of our phones altogether. I was imagining what the police would say: Why do you let your children surf the web and download apps from foreign sites? My children liked one particular game about a cat called My Talking Tom. It was harmless. But even a children’s game could be used as a reason to send someone to a camp.

It was completely unpredictable. Take my nephew, for example. My nephew has a friend who never knew his father. The father had left for Afghanistan when he was still in the womb. He never saw him. Years later, the father called from Afghanistan. The son called his mother, the mother called my nephew—a long chain of phone calls. The police traced the calls and took every single person to the camps, even my nephew. Because of this, because of a phone call, my nephew spent a year in a camp. When he got out, he was a different person.

On May 1, 2018, my husband got a phone call. An official was on the other end. Are you home? the official asked. Please stay there. We have to ask you some questions. A few officers showed up, not in uniform—in plainclothes. They came into our house and sat down with my husband. They wanted to know about his childhood. For a time, when he was fourteen, he had studied the Koran with a neighbor. They knew about it. So, they said, it appears that when you were young you studied the Koran. My husband admitted he had, but said he was underage. The officials conferred with one another. Then we’ll have to detain your parents, they said. No, he said. In that case, I was sixteen at the time. The truth is, he hadn’t studied the Koran at an official school. There was just an old guy around his village, a teacher who knew the Koran. Teenagers would go in a group to study at his house. My husband went for a while. They accepted this and left. Somehow we believed that was the end of it.

Four days later, on May 5, they took him. That day, the police called my husband again and asked him to come to the nearest police booth. On every street corner of the city in Ghulja, there is a police booth. He left home with his brothers. At the booth, the officer was already expecting him. When my husband approached, he was asked: Are you Nurmamet Mamentimin? As soon as my husband handed over his ID card, he was handcuffed. His brothers watched the whole thing happen. My husband realized he was being sent to a camp. He pleaded with them. My father, he said. My father, he’s in a wheelchair. He’s disabled. Can I say goodbye to my father?

They drove him back to our house. It was a large house. We were all living there together: my brothers-in-law, their families, and my husband’s father. That’s where I saw him for the last time. We had time to say goodbye. I remember the handcuffs. These weren’t tiny bracelets. They were huge. You couldn’t miss them. My children saw their father in handcuffs. They were surprised. My son was old enough to wonder: Is my father a criminal?

We gave him some warm clothes. We already knew it was very cold in the camps. We had heard that it was cold. Outside the house, next to the police car, we said goodbye. We were crying. Then they put a black hood over his head and guided him into the car. We were standing right there, his whole family. Neighbors could see us—everyone could see as they put the hood on. I think they wanted everyone to see.

So they took him away, all because twenty years ago, when he was fourteen years old, he had studied the Koran with some other teenagers at an old man’s house. By asking around, we found out that the police have detained all of these teenagers, or former teenagers—everyone who studied there.

They told us they were taking him to a camp—Zhuliiz is what the name sounded like to me. It’s about fifteen miles from Ghulja. But we never saw him there, and I haven’t had any contact with him in a year. The camp wasn’t far, but none of us dared to visit. One local policeman who took pity on us would come to our house just to tell us he was all right. Don’t worry, he told us. He’s doing fine.

A month after my husband was arrested, I went back to Kazakhstan with our children because our visa was expiring. I wanted to extend my visa in China because my son was going to a Chinese school and I wanted to be near my husband. But when I got to Kazakhstan, I was told that such visas are no longer issued, and that children need a permit from their Chinese-born parent. And this parent—his father—was in a reeducation camp.

After I came back to Kazakhstan, my husband was permitted to call his mother. He said he wasn’t in the camp any longer. Now I’m in a prison, he told her. They had transferred eight thousand people overnight from the camp to a prison in Kunes, forty miles away. They numbered every person, so my husband was able to find out how many there were in total. His own number was six thousand and something. As far as I know, there wasn’t any trial or any sentence.

I began to speak about his case only recently, just a week ago. Before that, I didn’t complain, because his parents warned me not to. But now my in-laws have approved my efforts. We’re planning to file complaints. We can’t speak directly about his case, but I tell them that I’m collecting documents for my son. I use my son as a way of talking about my husband. When I say “son,” they understand that I mean “husband.”

My son, my real son, has become aggressive. He was eight when his father was taken. My daughter is still young; she doesn’t understand what happened. She just asks when he’s coming home. My son took it harder. But they both know he’s gone. They’re traumatized. They both saw it happen.

Two months ago, in March, I got a tourist visa. It was a three-day visa for a group tour, the only way you can get a visa to enter Xinjiang anymore. I was planning to break away from the group to go to my in-laws’ house. I needed money. I don’t have enough to feed my children. My specialization is not in demand in Chunja, and to go to Almaty for work I would have to leave them. So I called my husband’s parents and said I was coming. The next day I got a call from my mother-in-law. It was very early in the morning. The weather has changed, she said. It’s not worth coming after all. You’ll get rained on.